Originally part of the Soviet Moon landing program, Soyuz has evolved into one of the world's most reliable crew transport spacecraft. A Soyuz rocket (right) is used to place the spacecraft into orbit.

Soyuz got off to a rocky start. Two early missions, Soyuz 1 in 1967, and Soyuz 11 in 1972, both ended in disaster. Despite these early setbacks, Soyuz has proved invaluable to the operation of orbiting space stations. The value of Soyuz goes far beyond simply carrying crew to and from space. Soyuz, capable of spending six months docked to a station, can serve as a lifeboat, allowing a space station to be evacuated at any time if conditions require it. Progress supply ships, based on Soyuz technology, can supply orbiting stations with fuel, water, food, spare parts, and other critical items.

Without Soyuz and Progress, continuous crewing of orbital outposts would not be possible.

The Soyuz spacecraft is comprised of three main modules.

The orbital module provides living and working space while in orbit. Docking equipment and rendezvous antennas, mounted on the top of the module, allows docking with orbiting space stations.

The descent module contains the crew launch and entry couches, spacecraft controls and parachutes. A heat-shield protects the module during re-entry. The spacecraft has several retro rockets, designed to fire moments before touchdown, to help reduce landing impact forces.

The descent module is 2.2 meters in diameter and is the only component of the Soyuz spacecraft to return to Earth. 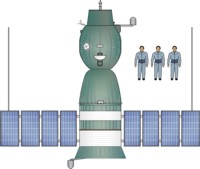 Early Soyuz capsules were designed to include between one and three crewmembers. Designed to manouver in orbit, Soyuz represented a significant improvement over previous Vostok and Voskhod Spacecraft.

An early probe and drogue docking system was included in the design. This system allowed two spacecraft to dock while in orbit, but did not include a pressurized tunnel for crew transfers. To transfer from one docked spacecraft to another, cosmonauts would conduct an EVA and use externally mounted hand rails to move between the spacecraft. The orbital modules of each spacecraft would be used as airlocks during a crew transfer.

Piloted by Vladimir Komarov, Soyuz 1 launched in April, 1967. The planned launch of a second Soyuz spacecraft would have allowed a docking to take place. However, problems with the Soyuz 1 spacecraft resulted in the cancellation of the second Soyuz launch.

Mounting problems with the spacecraft, including control problems and a solar array that did not deploy, resulted in an early termination of the mission. During descent, the spacecrafts parachute failed to deploy properly. The Soyuz 1 descent module crashed into the ground much faster then planned, killing Komarov.

Soyuz 3, piloted by Georgi Beregevoi, rendezvoused in orbit with the unmanned Soyuz 2 spacecraft in October 1968. A planned docking was not accomplished.

Soyuz 4 and 5 conducted a docking and crew transfer (via EVA) in January 1969.

Soyuz 6, 7, and 8, all launched in October, 1969, carried out the first rendezvous between three orbiting spacecraft.

Soyuz 9, launched in June of 1970, established an orbital endurance record of over 17 days. 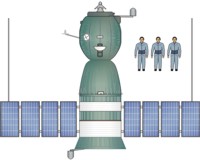 Soyuz spacecraft, configured for space station dockings, included an improved probe and drogue docking system allowed crew to transfer between docked spacecraft thru a pressurized tunnel. Like earlier missions, the three-cosmonaut crews did not wear spacesuits.

Soyuz 10, launched in April 1971, rendezvoused with the Salyut 1 space station. Although a soft docking was accomplished, the crew could not achieve a secure enough docking to allow entry into the station. Forced to conclude their mission early, the spacecraft and crew de-orbited and made a safe landing in Russia.

Unfortunately, the Soviet triumph would end in tragedy. During reentry, a malfunctioning valve allowed the spacecrafts atmosphere to vent. The cosmonauts, not wearing spacesuits, died of asphyxiation.

The rest of the descent and landing system worked as planned and the capsule landed intact. Recovery crews attempted, unsuccessfully, to revive the crew. This would be the last time Soyuz would launch crew without spacesuits. 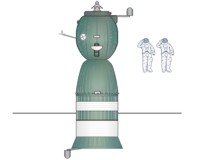 After the deaths of the Soyuz 11 crew, a number of significant changes were made to the Soyuz design. In order to reduce the risk from a loss of atmosphere, it was decided that all future cosmonauts would wear spacesuits during ascent and landing. In order to accommodate the bulky spacesuits in the cramped descent module, the crew was reduced from three to two.

An automated system, known as Igla, was used during rendezvous and docking.

Soyuz Ferry spacecraft flew a number of successful missions between 1973 and 1981. Missions were flown to the Salyut 3, Salyut 4, Salyut 5 and Salyut 6 space stations. 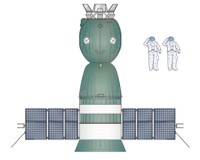 In the early 1970's, several Soyuz spacecraft were modified to support the international Apollo-Soyuz Test Program.

Soyuz normally used a probe and drogue docking system. For this mission, a new docking system, known as APAS-75 was used. APAS (Androgynous Peripheral Assembly System), allowed either spacecraft to be the active partner in docking maneuvers.

Like the Soyuz Ferry, a two-cosmonaut crew would be carried. Solar arrays were added to extend the orbital duration of the spacecraft.

Several test missions including the un-manned Cosmos 638 and Cosmos 672, and the manned Soyuz 16 mission, were flown in 1974.

In July 1975, Soyuz 19 rendezvoused and docked with an Apollo spacecraft. The Soyuz was crewed by cosmonauts Alexei Leonov, and Valeri Kubasov.

A backup spacecraft, known as Soyuz 22, flew an independent mission in 1976. Replacing the APAS docking apparatus with a camera system allowed the crew to conduct Earth observations. 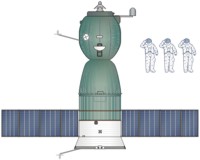 The next major Soyuz variant was known as Soyuz-T.

Soyuz-T used solar cells as an energy source. Rearrangement of the descent capsules interior allowed up to three cosmonauts (with spacesuits) to be transported. 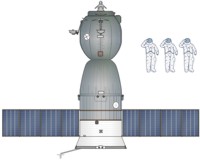 Introduced in the mid-1980's, Soyuz-TM would become the primary crew transport vehicle for the Mir space station. Later missions would fly to the International Space Station.

Soyuz-TM replaced the Igla rendezvous system, used on previous Soyuz and Progress spacecraft, with the more capable Kurs system. With an ability to remain docked to a space station for six months, the Soyuz-TM was ideal for supporting long duration missions.

The first Soyuz-TMA was launched to the International Space Station in October 2002.

Limited duration space stations, such as Skylab and several of the early Salyut stations, were launched with all the supplies needed for their planned missions. Stations designed for longer occupation often can not be launched with all supplies on board. Things such as food, water, fuel, spare parts and other items are needed to maintain the station. While crewed spacecraft, such as Soyuz, can carry a limited amount of cargo in addition to crew, it is not nearly enough to support ongoing operations.

The Soviets developed Progress, based on flight proven Soyuz-Ferry technology, as an unmanned supply ship. Not needing to include a crew, several major changes could be made. The descent module was removed completely. In its place was a newly developed tanker module. Fuel stored in tanks, within the tanker module, could be transferred to the space stations fuel tanks. This was accomplished via special propellant line connections incorporated into the docking equipment.

The orbital module was re-configured to allow transport of pressurized cargo. After docking, space station crew members could open the hatch and unload cargo from the orbital module.

While attached to a station, engines on the Progress could be used to adjust the orbit of the entire complex.

At the end of their mission, Progress spacecraft would be filled with trash, undocked from the station, and de-orbited over remote areas of the Pacific ocean. 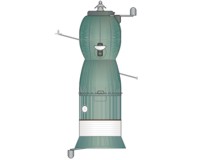 Early Progress spacecraft, based on the Soyuz Ferry, were battery powered and included the Igla automatic rendezvous and docking system.

Progress 1, launched in January 1978, delivered food and supplies to the Salyut 6 space station. While docked, fuel transfers were successfully made between the Progress tanker module and the stations fuel tanks.

Between 1978 and 1990, over forty Progress freighters were launched. Missions were flown to the Salyut 6, Salyut 7, and Mir space stations. 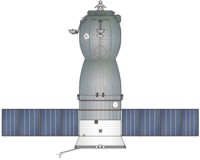 A small return capsule is included on some flights. Carried in the orbital module, the return capsule could be deployed after the Progress undocks from the station.

TKS return capsule from Kosmos 1443. Developed by the former Soviet Union to ferry crew and supplies to spacestations, the TKS was designed to carry a crew of three and be reusable. Several unmanned missions were flown, but the program was cancelled before crewed missions were flown. The TKS shown here was launched in 1983 and spent five months in orbit before returning. The spacecraft is on display at the National Air and Space Museum.(Photos: Richard Kruse, 2008)

Photos of Russian sokol space suit worn by space tourist Dennis Tito during his 2001 spaceflight to the International Space Station. The suit was on display at the National Air and Space Museum. (Photos: Richard Kruse, 2008)