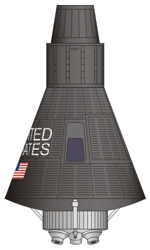 Mercury-Redstone and Mercury-Atlas rockets. (With human figure for scale.)

Started in 1958, Project Mercury was the United States' first manned spacecraft program. The program included a number of unmanned test flights, some including primates, prior to flying human astronauts.

Mercury MA-7 (Aurora 7) Capsule on display at the Chicago Museum of Science and Industry. Launched on May 24, 1962, astronaut Scott Carpenter conducted three orbits in this spacecraft. (Photos: Richard Kruse, 2008)

Mercury Capsule on display at the National Museum of the United States Air Force. Although this spacecraft is flight-rated, it was not flown. (Photos: Richard Kruse, 2007)

Mercury-Redstone at the US Space and Rocket Center

This New Ocean:
A History of Project Mercury

The Mercury 13:
The True Story of Thirteen Women and the Dream of Space Flight
By Martha Ackmann.