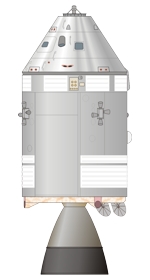 Apollo Command and Service modules were flown by the United States between 1966 and 1975. The spacecraft were grouped into two major configurations. Early missions were conducted using Block 1 spacecraft, while later flights, including all lunar missions, were flown using Block 2 spacecraft.

Block 1 spacecraft did not have docking capabilities and were flown in Earth orbit only. A number of test flights, flown using Saturn IB and Saturn 5 boosters, were conducted.

The CM-012 capsule, better known as Apollo 1, was destroyed in a fire while conducting tests on the launch pad. The tragedy resulted in the loss of astronauts Grissom, White, and Chaffee.

Block 2 command modules included many improvements over the earlier models. Significant changes included an outward opening hatch that could be quickly opened, and docking equipment allowing operations with the Apollo Lunar Module.

Three command modules were flown to the Skylab space station. Each carried three astronauts to and from the station.

The final Apollo command module to fly was CM-111. Flown as the American half of the Apollo-Soyuz test project, the spacecraft successfully docked with the Russian Soyuz 19 spacecraft in July of 1975.

The uncrewed Apollo 6 test flight was launched on April 4, 1968. The spacecraft is currently on display at the Fernbank Science Museum in Atlanta, Georgia. (Photos: Greg Fieser, 2018)

Apollo 9 (AS-504) was launched to Earth orbit on March 3, 1969. Astronauts McDivitt, Schweickart and Scott conducted the first manned test of the Lunar Module (LM-3) and the Apollo space suits. The highly successful mission returned to Earth on March 13, 1969. These photos were taken at the Michigan Space and Science Center. (Photos: Richard Kruse, 2002)

High resolution photos of the Apollo 9 space capsule interior. Stewart Bailey took these photos at the Michigan Space and Science Center during the late 1990s. The Apollo 9 is now on display at The San Diego Aerospace Museum. (Photos: Stewart Bailey)

Command and Service Module (CSM-105) was originally used for acoustic and vibration testing. The spacecraft is now part of the Apollo-Soyuz (ASTP) display at the National Air and Space Museum. (Photos: Richard Kruse, 2008)

Apollo 15 Command Module on display in the National Museum of the US Air Force. (Photos: Richard Kruse, 2018)

Some older photos of the spacecraft. (Photos: Richard Kruse, 2008)

W. David Compton, Where No Man Has Gone Before: A History of Apollo Lunar Exploration Missions, NASA SP-4214. 1989.