Pegasus XL uses an Orion 50S XL as its first stage. The 50S XL has a fixed nozzle.

Second stage is an Orion 50XL.

An Orion 38 serves as third stage. The Orion 38 includes a vectorable thrust nozzle.

Pegasus-XL on display at the Udvar-Hazy center. (Photos: Richard Kruse, 2008)

The Taurus is a four-stage, all solid propelled launch vehicle.

Taurus has flown nine missions between 1994 and 2011. Three of the nine launches failed.

The rockets third and fourth stages are similar to those used with the Pegasus launch vehicle.

The Taurus typically uses a Castor-120 as its first stage. On some models, a Peacekeeper first stage is used.

Second stage can be either an Orion 50ST or 50SXLT. Both models feature a vectorable thrust nozzle.

The third stage is an Orion 50T or Orion 50XLT. Both models feature a vectorable thrust nozzle.

An Orion 38 serves as fourth stage. The Orion 38 includes a vectorable thrust nozzle. 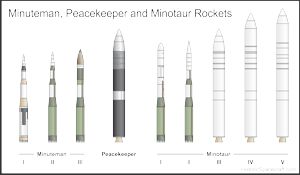 Operated by Orbital Sciences Corporation, the Minotaur series of launchers are derived from Minuteman and Peacekeeper intercontinental ballistic missile hardware.

Minotaur I is an all solid fueled, four stage space launcher. The first and second stages were formally used with the Minuteman ICBM.

The rockets third and fourth stages are similar to those used with the Pegasus launch vehicle.

Third stage is an Orion 50XL. Built by ATK, the 50XL features a vectorable nozzle.

An ATK Orion 38 serves as the fourth stage. The motor has a vectorable nozzle.

First stage of the Minotaur IV is a SR-118 solid rocket motor.

Fourth stage is typically an Orion 38 solid rocket motor. A Star 48BV may also be used if required.

The Minotaur V is a five stage version of the Minotaur IV. The first three stages were formally used with the Peacekeeper (MX) ballistic missile.

First stage of the Minotaur V is an SR-118 solid rocket motor. 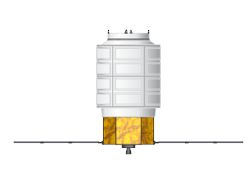 Cygnus Spacecraft
The Cygnus spacecraft is designed as a re-supply vehicle for the International Space Station.

Developed by Orbital Sciences Corporation, the Antares rocket conducted its maiden flight in April 2013. The rocket was launched from the Mid-Atlantic Regional Spaceport, located near NASA's Wallops Flight Facility in Virginia.

The second stage initially used a solid-fueled Castor 30A motor. Later missions used the Castor 30B or Castor 30XL motor.

Future missions may optionally use a STAR-48 based, solid-fueled third stage motor.

A regular payload for the Antares rocket is the Cygnus spacecraft. Cygnus was developed to ferry supplies to the International Space Station. Known as CRS, or commercial resupply missions, these flights are scheduled to occur around twice per year.

More information about Antares, can be found at the Northrop Grumman website.