The Saturn Family of Rockets 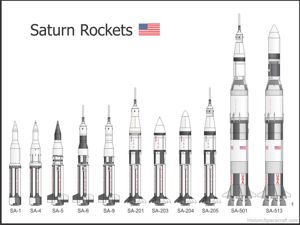 Saturn rockets were used in support of the Apollo lunar missions, the launch of the Skylab space station, Ferrying crews to and from Skylab, and to launch the American half of the Apollo-Soyuz Test Project.

The Saturn I Rocket 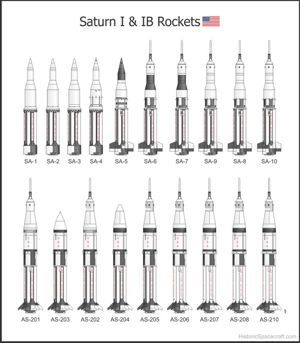 The U.S. Army Ballistic Missile Agency (ABMA), under the direction of Wernher von Braun, began developing the Saturn I rocket in 1957. The unique first stage was composed of clustered tanks. This clustering of smaller tanks, rather than manufacturing larger tanks, allowed the use of tooling from the Redstone and Jupiter missile programs.

The Saturn I design later evolved into the Saturn IB rockets of the Apollo era.

The S-I stage was manufactured by Chrysler and was powered by eight H-1 engines.

Block 2 flights included the S-IV second stage. The S-IV, built by Douglas Aircraft Company, was powered by six Pratt and Whitney RL-10 engines. The engines were gimbaled and used liquid hydrogen and liquid oxygen as propellants.

Photos of the Saturn 1 (Block 2) at the US Space and Rocket Center in Huntsville, Alabama. The second stage apears to be a mock-up and is lacking many external details found on actual S-IV stages. (Photos: Richard Kruse, 2007)

Developed by McDonnell Douglas, the S-IVB served as second stage for S-IB rockets, and later as third stage for Saturn V rockets. Fueled with liquid hydrogen and liquid oxygen, the S-IVB was powered by a single J-2 engine.

The S-IB rocket flew nine times. Early missions included tests of the S-IVB stage, Apollo command and service module tests, and one flight with a Lunar Module. The first crewed mission, Apollo 7 (SA-205), was flown in October, 1968. In the 1970's Saturn IB rockets launched all three Skylab crews and the American half of the Apollo-Soyuz test project.