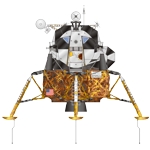 The Apollo Lunar Module (LM) was designed to transport two astronauts from Lunar orbit to the lunar surface and back again. Developed by Grumman, the LM had two stages. The lower component was known as the descent stage and the upper part was the ascent stage.

Apollo 11, launched on 16 July 1969, would be the first landing mission. LM-5, piloted by Neil Armstrong and Edwin Aldrin, landed successfully on the Lunar surface on 20 July 1969.

Improved Lunar modules, known as 'H' series models, were flown on Apollo 12, 13 and 14. These LMs could spend two days on the Lunar surface.

Later versions of the Lunar module, used on Apollo 15, 16 and 17, featured even more improvements. Known as 'J' series lunar modules, these spacecraft could stay on the surface for three days. The advanced landers also included room for a Lunar Roving Vehicle. 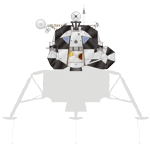 The pressurized crew compartment dominated the front of the ascent stage and included flight stations for both the commander and pilot. The crew compartment also included environmental control system equipment, the ascent stage engine cover, and storage areas for equipment and supplies. A square hatch, located on the front of the pressurized compartment, allowed space suited astronauts to exit the spacecraft. A circular docking hatch, located on the top of the spacecraft, permitted docking with the Apollo command module.

Two large, triangular windows allowed easy viewing of the lunar surface. A rectangular window, located on the top of the spacecraft over the commanders flight station, was used during rendezvous and docking with the command module.

The Aft Equipment Bay, housing electronic components, was located on the rear of the spacecraft. The bay was unpressurized and included a water-glycol cooling system to prevent equipment from overheating. Two oxygen tanks and two helium tanks were located in the bay.

The Reaction Control Subsystem (RCS) was used to control attitude and translation of the Lunar Module. The system consisted of 16 thrusters arranged in clusters of four. The system used hypergolic propellants.

The RCS was made up of two independent systems each with eight thrusters. Each system included its own propellant supply and helium pressurization equipment.

During ascent from the Lunar surface, the RCS system could be configured to draw fuel from the main propulsion system fuel tanks. This preserved fuel in the RCS tanks for maneuvering in Lunar orbit.

The ascent stage engine was used to launch from the lunar surface to lunar orbit. Designed to be as reliable as possible, the ascent engine produced a fixed thrust and cannot be gimbaled. The engine used hypergolic propellants.

Propellant was contained in two spherical tanks located on either side of the ascent stage. Helium was used to pressurize the system.

The following photos were taken at the EAA Museum. (Photos: Richard Kruse, 2017) 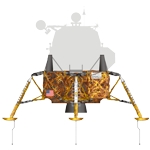 Other components of each landing gear assembly included secondary struts, a cross member assembly, side frames, and a deployment and down-lock mechanism.

A ladder and porch, mounted on the front leg, allowed astronauts access to and from the lunar surface. The ladder included nine rungs.

The remaining three legs each included an extendable lunar surface sensing probe. When a probe contacted the Lunar surface, an indicator light would alert the astronauts.

The descent engine provided propulsion from Lunar orbit to the Lunar surface. The engine allowed the LM to hover over the Lunar surface as a landing site was selected. The throttleable engine used hypergolic propellants and could be gimbaled for thrust vector control.

Propellant was contained in four tanks located within the descent stage. Helium was used to pressurize the system.

The last three Apollo missions each included a lunar roving vehicle, or LRV, designed to transport two astronauts on traverses of up to several kilometers from the lander. For transport to the Moon, the rover was folded and packed into a quadrant of the Descent Stage.

The rover frame was 3.1 meters long and had a 2.3 meter wheelbase. Each wheel was powered by its own 1/4 hp motor. Two additional motors provided front and rear steering. A control panel and hand controller allowed either astronaut to operate the rover.

The rover communication system included both a low-gain antenna and a large mesh dish high-gain antenna. A color television camera, which could be remotely controlled from Earth, allowed scientists and engineers to monitor the astronauts progress.

At the end of the surface stay, an astronaut would park the rover a safe distance from the Lunar Module. Engineers in mission control could view television images of the ascent stage liftoff using the rovers TV camera.

Lunar Module (LM-2) on display at the National Air and Space Museum. This lunar module was to perform the second of two planned unmanned test missions. The mission was cancelled when the previous mission proved successful. (Photos: Richard Kruse, 2008)

Chariots for Apollo
The NASA History of Manned Lunar Spacecraft to 1969.

Moon Lander
How We Developed the Apollo Lunar Module. By Thomas Kelly.

Apollo 11
An Insight into the Hardware from the First Manned Mission to Land on the Moon.

Virtual LM
A Pictorial Essay of the Engineering and Construction of the Apollo Lunar Module: Apogee Books Space Series 47.

Apollo 12
On the Ocean of Storms
By David M. Harland.