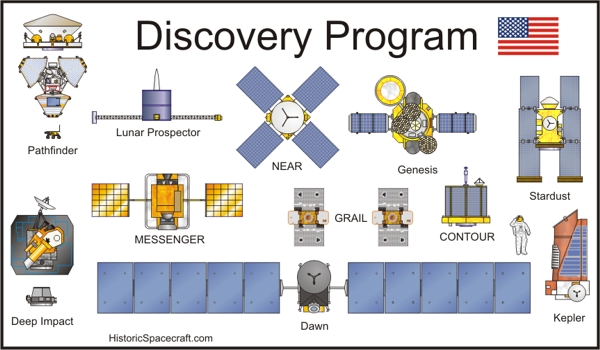 Proposals must come in under a predetermined price cap. The cap includes development, construction, launch and operation costs. To meet these goals, mission planners need to quickly develop and fly missions. This helps reduce the mission creep that can result in the delays and spiraling cost overruns experienced by some flagship missions.

The low-cost approach to space exploration means more missions can be flown. Since the first Discovery mission, NEAR, was launched in 1996, missions have been flown every year or two.

Launched on 4 December 1996, Mars Pathfinder became the first Mars lander to use the airbag landing system.

The experience gained operating the rover, as well as the successful use of the airbag landing system, proved critical to the later success of the much larger and more capable Mars Exploration Rovers launched in 2003.

These photographs were taken at the Udvar Hazy Center. (Photos: Richard Kruse, 2009)

Launched on 17 February 1996, NEAR (Near Earth Asteroid Rendezvous) became the first probe to orbit, then land on, an asteroid. NEAR returned over 160,000 images of its target, 433 Eros, the largest of the Near Earth Asteroids. NEAR was launched on a Delta-7925-8 rocket (right).

NEAR carried a variety of scientific instruments, including a magnetometer, a near-infrared spectrometer, an X-ray/gamma-ray spectrometer, a laser rangefinder, and a multispectral imager.

NEAR entered orbit around 433 Eros in February of 2000. Over the year, the spacecraft was able to study the entire surface of the asteroid.

In March of 2000, the NEAR mission was renamed "NEAR Shoemaker" in honor of Dr. Eugene Shoemaker. Dr. Shoemaker, an expert in planetary geology, participated in the development of the NEAR spacecraft. Shoemaker died in an automobile accident in 1997.

On 12 February 2001, the NEAR Shoemaker performed the first ever landing on an asteroid. During its descent, the spacecraft was able to acquire the highest resolution images ever taken of an asteroid. Although not designed to land, the touchdown was gentle enough that the spacecraft remained intact and was able to transmit data for a short period of time.

The highly successful NEAR Shoemaker mission acquired a large amount of scientific data, including over 160,000 images.

Launched on 6 January 1998, Lunar Prospector mapped the chemical composition of the Lunar surface.

Lunar Prospector was launched on an Athena-2 rocket (right).

Launched 7 February 1999, Stardust's mission was to collect samples from a comet's coma and return them to Earth.

A flyby of the target comet, Wild 2, was accomplished on 2 January 2004. During the flyby, Stardust extended a special particle collector to gather samples of material near the comet. The particle collector used a material known as 'aerogel' to catch tiny pieces of comet material.

These samples represent the first comet coma samples, and the first interstellar dust particles, to be returned to Earth for study.

In addition to particle collection, the Stardust spacecraft was fitted with several scientific experiments, including a Comet and Interstellar Dust Analyzer (CIDA), a Dust Flux Monitor (DFM), and a Navigation Camera (NavCam). These instruments collected scientific data during the flyby of Wild 2.

After completing its primary mission, the still healthy Stardust spacecraft was given a new mission. Named Stardust-NExT (New Exploration of Tempel 1), the spacecraft was re-targeted for a rendezvous with the comet Temple 1. If all goes as planned, the spacecraft will flyby Temple 1 on 14 February 2011. Examining two comets with the same spacecraft and instruments will provide an opportunity to compare and contrast the characteristics of each comet.

Temple 1 was previously investigated by the Deep Impact mission. Another Discovery Program mission, Deep Impact struck the comet with a 770 lb impactor. The Deep Impact spacecraft photographed and analyzed the impact plume to gather data about the comets composition. The fast speed of the flyby, along with the cloud of impact debris, prevented the Deep Impact probe from directly imaging the impact crater. The upcoming Stardust-NExT flyby will be specifically targeted to allow imaging of the crater. Photos of the crater should reveal important clues about the structure and composition of comets.

Stardust was launched on a Delta-7426 rocket (right).

Stardust sample return capsule on display at the National Air and Space Museum. These are photos of the actual return capsule. (Photos: Richard Kruse, 2008)

Launched on 8 August 2001, the Genesis mission collected solar wind particles and returned them to Earth for study. Despite a parachute failure during reentry, much of the data was recovered.

Genesis was launched on a Delta-7326 rocket (right).

CONTOUR was launched on a Delta-7425 rocket (right).

The planned targets for CONTOUR were comets Encke and Schwassmann-Wachmann-2. The spacecraft would have taken high resolution images and conducted gas and dust analyses at each comet.

CONTOUR was successfully launched into Earth orbit. Several weeks later, on 15 August 2003, the probe was scheduled to fire a rocket to propel itself out of Earth orbit. No contact was made with the spacecraft after the scheduled rocket firing. Imagery from other sources seems to indicate that the vehicle exploded during the engine firing.

Launched on 12 January 2005, the Deep Impact mission conducted a flyby of Comet Tempel 1. Prior to the flyby, a large 770 pound impactor was released. As planned, the impactor struck the comet at a speed of 23,000 miles per hour, creating a crater and ejecting comet material into space. From a safe distance, the main spacecraft photographed the impact and resulting plume.

Deep Impact was launched on a Delta-7925 rocket (right).

The comet Temple 1 was discovered by Ernst Tempel in 1867. The comet orbits the Sun every five and a half years. The Stardust spacecraft, having completed its primary mission in 2006 has been given a new mission. Renamed Stardust-NExT (New Exploration of Tempel 1), the spacecraft has been retargeted for a flyby of comet Temple 1 in February, 2011. If all goes as planned, Stardust-NExT should be able to image the impact crator left by Deep Impact.

MESSENGER, (MErcury Surface, Space ENvironment, GEochemistry, and Ranging) was launched on 3 August 2004, the MESSENGER mission will be the first spacecraft to orbit Mercury.

Enroute to Mercury, MESSENGER conducted several planetary flybys, including an Earth flyby in August of 2005, Venus flybys in October 2006 and June 2007, and Mercury flybys in January 2008, October 2008, and September 2009.

If all goes as planned, the spacecraft will enter orbit around Mercury in March of 2011. An array of instruments will examine the planet for a duration of at least one Earth year.

MESSENGER was launched on a Delta-7925H rocket (right).

Dawn was launched on a Delta-7925H rocket (right).

Launched on 6 March 2009, The Kepler mission is a space telescope searching for Earth-sized planets orbiting distant stars. Kepler was launched on a Delta-7925-10L rocket (right).

In recent years, scientists have discovered several hundred planets orbiting other stars. However, most of these planets are very large, gas giant, type planets. Others are planets far too close to stars to provide an Earth-like environment for life.

Earth-like planets, because of their small size, are very difficult to locate from ground based telescopes. Earth's atmosphere creates too much distortion to see such small, distant objects.

By focusing on a single field of view for three and a half years, Kepler will search for short term dimming of stars. Twice per hour, Kepler will observe over 100,000 stars looking for dimming that might indicate the passage of a planet orbiting the star. (Think of a Solar eclipse. As the Moon passes in front of the Sun, the sunlight reaching Earth dims for a period of time.)

The main scientific instrument, indeed the only instrument, is a Schmidt type telescope with a .95 meter aperture and a 1.4 meter primary mirror. The focal plane array includes an amazing 95 megapixels!

The price tag for the Kepler mission, including development, construction, launch cost, and the first 3.5 years of

The mission is comprised of two spacecraft. Both spacecraft were launched on the same Delta-7925H-10-C rocket (right). The launch took place on 10 September 2011 from Space Launch Complex-17B at Cape Canaveral Air Force Station.

The spacecraft, known as GRAIL-A and GRAIL-B will orbit the Moon at around 50 km altitude. The probes will be separated by around 200 km.

GRAIL was the 11th mission in NASA's Discovery program.