Past, Current and Future Missions

Launched on 17 February 1996, NEAR (Near Earth Asteroid Rendezvous) became the first probe to orbit, then land on, an asteroid. NEAR returned over 160,000 images of its target, 433 Eros, the largest of the Near Earth Asteroids. NEAR was launched on a Delta-7925-8 rocket (right).

NEAR carried a variety of scientific instruments, including a magnetometer, a near-infrared spectrometer, an X-ray/gamma-ray spectrometer, a laser rangefinder, and a multispectral imager.

NEAR entered orbit around 433 Eros in February of 2000. Over the year, the spacecraft was able to study the entire surface of the asteroid.

In March of 2000, the NEAR mission was renamed "NEAR Shoemaker" in honor of Dr. Eugene Shoemaker. Dr. Shoemaker, an expert in planetary geology, participated in the development of the NEAR spacecraft. Shoemaker died in an automobile accident in 1997.

On 12 February 2001, the NEAR Shoemaker performed the first ever landing on an asteroid. During its descent, the spacecraft was able to acquire the highest resolution images ever taken of an asteroid. Although not designed to land, the touchdown was gentle enough that the spacecraft remained intact and was able to transmit data for a short period of time.

The highly successful NEAR Shoemaker mission acquired a large amount of scientific data, including over 160,000 images.

Launched on 7 February 1999, Stardust's mission was to collect samples from the comet Wild 2's coma and return them to Earth. The spacecraft was launched on a Delta-7426 rocket (right).

Enroot to its planned rendezvous with Wild 2, the spacecraft conducted a flyby of the main-belt asteroid, 5535 Annefrank, in 2002.

A flyby of the target comet, Wild 2, was accomplished on 2 January 2004. During the flyby, Stardust extended a special particle collector to gather samples of material near the comet. The particle collector used a material known as 'aerogel' to catch tiny pieces of comet material.

These samples represent the first comet coma samples, and the first interstellar dust particles, to be returned to Earth for study.

In addition to particle collection, the Stardust spacecraft was fitted with several scientific experiments, including a Comet and Interstellar Dust Analyzer (CIDA), a Dust Flux Monitor (DFM), and a Navigation Camera (NavCam). These instruments collected scientific data during the flyby of Wild 2.

Stardust sample return capsule on display at the National Air and Space Museum. These are photos of the actual return capsule. (Photos: Richard Kruse, 2008)

After completing its primary mission, the still healthy Stardust spacecraft was given a new mission. Named Stardust-NExT (New Exploration of Tempel 1), the spacecraft was re-targeted for a rendezvous with the comet Temple 1. The spacecraft conducted a flyby of Temple 1 on 14 February 2011. Examining two comets with the same spacecraft and instruments provided an opportunity to compare and contrast the characteristics of each comet.

Its mission complete, the spacecraft was commanded to turn off its transmitter in March, 2011.

Hayabusa was a Japanese mission to orbit an asteroid, collect samples from the asteroids surface, and return the samples to Earth for study.

The target for the Hayabusa mission, 25143 Itokawa, is an asteroid measuring approximately 540 meters by 310 meters by 250 meters, with an orbital period of 1.52 years

Hayabusa was launched on the M-V-5 booster (illustration at right) on 9 May 2003 from the Kagoshima launch center.

Hayabusa, originally called Muses-C, was a pioneering sample return mission, powered by a highly efficient, ion propulsion system. If all went well, the spacecraft would rendezvous with the asteroid, 25143 Itokawa, survey its surface from a station keeping position, conduct several landings on the surface, collect samples, lift off and return the samples to Earth.

The spacecraft was designed to collect samples from three areas on the asteroids surface. Three mirrored balls, one for each landing approach, were carried. As the spacecraft approached the asteroid, one of the highly reflective balls would be dropped to the surface. The reflection from the ball would show up clearly in images taken by onboard cameras. Analyzed by onboard computers, the balls would provide fixed reference points to aid navigation during the final approach and sample collection.

Near the surface, a collection horn, extending from the bottom of the spacecraft, would contact the surface. A small metal projectile would then be fired into the surface, within the cone. Asteroid material, thrown up by the impact, would be funneled into a collection device.

The spacecraft carried a small surface lander, known as Minerva. Minerva was designed to be deployed as Hayabusa approached the asteroid. Minerva was not part of the sample collection system.

In addition to Minerva, Hayabusa carried a number of instruments to image and analyze the asteroid's surface. Included was a Light Detection and Ranging Instrument (LIDAR), an X-Ray Fluorescence Spectrometer (XRS), a Near Infrared Spectrometer (NIRS), a Telescopic Camera (AMICA), and a Wide-View Camera (ONC-W).

Problems Along the Way

The Hayabusa spacecraft experienced its share of problems. Exposure to a solar flare early in the mission degraded its solar panels, resulting in less power available for its electric propulsion system. Operations were further hampered when a reaction wheel failed in July 2005. Another reaction wheel failure, in September 2005, left the spacecraft with only one functioning wheel, forcing the spacecraft to depend more on chemical thrusters to maintain attitude.

Hayabusa rendezvoused with Itokawa on 12 September 2005. The spacecraft spent several weeks mapping the asteroid, from station keeping positions nearby.

On 12 November 2005, Hayabusa, during a practice approach, deployed the small Minerva lander. Unfortunately, Minerva was released at the wrong time. Contact was lost and it probably missed the asteroid completely.

The first surface touch down occurred on 20 November 2005. This was the first time a spacecraft made a controlled landing and take-off from an asteroid. Unfortunately, the spacecraft was not able to collect a sample on this landing. A second landing took place on 26 November 2005. Initial indications were that a sample was collected. Later telemetry, however, indicated part of the sample collection system might not have worked properly. It was unclear if any samples were collected.

All communication with Hayabusa was lost on 9 December 2005. Contact was not made again until March 2006. Apparently a chemical fuel leak, in the bi-propellant fuel system, caused the spacecraft to lose attitude control. Unable to stabilize itself, the spacecraft could not aim its antenna at Earth for a period of time.

On 25 April 2007, the spacecraft started the long journey back to Earth. Despite the failure of two of three reaction wheels, degraded solar panels, a fuel leak, problems with the ion propulsion system, and a number of other anomalies, the spacecraft is very near to completing its mission. Scientists were unsure if the spacecraft actually collected material from the asteroids surface.

The Hayabusa re-entry capsule returned to Earth in June, 2010. Using parachutes, the capsule landed safely near Woomera, Australia. Several hundred dust particles, believed to be from Itokawa, were recovered from within the capsule. Analysis of the samples is underway.

The Hayabusa mission provided invaluable data about the surface features and composition of asteroid Itokawa. Techniques pioneered on this mission are certain to be beneficial for future sample return missions.

CONTOUR was launched on a Delta-7425 rocket (right).

The planned targets for CONTOUR were comets Encke and Schwassmann-Wachmann-2. The spacecraft would have taken high resolution images and conducted gas and dust analyses at each comet.

CONTOUR was successfully launched into Earth orbit. Several weeks later, on 15 August 2003, the probe was scheduled to fire a rocket to propel itself out of Earth orbit. No contact was made with the spacecraft after the scheduled rocket firing. Imagery from other sources seems to indicate that the vehicle exploded during the engine firing.

Launched on 12 January 2005, the Deep Impact mission conducted a flyby of Comet Tempel 1. Prior to the flyby, a large 770 pound impactor was released. As planned, the impactor struck the comet at a speed of 23,000 miles per hour, creating a crater and ejecting comet material into space. From a safe distance, the main spacecraft photographed the impact and resulting plume.

Deep Impact was launched on a Delta-7925 rocket (right).

The comet Temple 1 was discovered by Ernst Tempel in 1867. The comet orbits the Sun every five and a half years. The Stardust spacecraft, having completed its primary mission in 2006 has been given a new mission. Renamed Stardust-NExT (New Exploration of Tempel 1), the spacecraft has been retargeted for a flyby of comet Temple 1 in February, 2011. If all goes as planned, Stardust-NExT should be able to image the impact crator left by Deep Impact.

The Dawn spacecraft, launched on 26 September 2007, was designed to orbit two of the largest bodies in the main asteroid belt - Ceres and Vesta. The Dawn spacecraft utilizes solar powered ion thrusters for propulsion.

Dawn was launched on a Delta-7925H rocket (right).

If all goes as planned, the Dawn spacecraft will reach Ceres in 2014.

Two Vega probes were launched by the Soviet Union in 1984. Each probe deployed a lander and balloon at Venus, then performed a flyby of Comet Halley. Each mission was launched on a Proton rocket (right).

Vega 1 was launched on 15 December 1984. Venus encounter and lander release occurred in June 1985. The encounter with Comet Halley occurred on 6 March 1986.

Vega 2 was launched on 20 December 1984. Venus encounter and lander release occurred in June 1985. The encounter with Comet Halley occurred on 9 March 1986.

ISEE-3 was part of a three spacecraft magnetospheric study. Instruments included a Gamma-Ray Burst Spectrometer, and an X-ray Spectrometer.

After completing its original mission in 1982, the spacecraft was renamed "International Cometary Explorer (ICE)" and maneuvered, using thrusters and gravity assists, to an intercept course with comet 21P/Giacobini-Zinner.

The spacecraft conducted a flyby of 21P/Giacobini-Zinner in September 1985.

Sakigake was launched on 8 January 1985 on a Japanese M-3-SII rocket. The launch took place at Uchinoura Space Center, Japan.

Sakigake conducted a fly-by of Comet P/Halley on 11 March 1986. Contact with the spacecraft was lost on 15 November 1995.

Suisei was launched on 19 August 1985 on a Japanese M-3-SII rocket. The launch took place at Uchinoura Space Center, Japan.

Suisei conducted a fly-by of Comet Halley on 8 March 1986. Contact with the spacecraft was lost on 15 November 1995.

Giotto was launched on 2 July 1985 on an European Ariane 1 rocket. The launch took place at the space center in French Guiana.

Built and operated by the European Space Agency (ESA), Giotto was Europe's first deep space probe, and the first probe to obtain close-up images of a comet nucleus.

Deep Space 1 served as a test-bed for a number of high-risk technologies, including an ion propulsion system and solar concentrator arrays. During its mission, the spacecraft conducted flybys of several targets, including the asteroid 9969 Braille in July 1999, and the comet 19P/Borrelly in September 2001.

Rosetta was launched on 3 February 2004 on an Ariane 5 rocket. The launch site was in Kourou, French Guiana.

Rosetta's primary mission was to rendezvous with, orbit, and send a lander to the surface of Comet 67P/Churyumov-Gerasimenko. The decade long journey to the comet included a number of flybys. The spacecraft made three fly-bys of Earth, in 2005, 2007, and 2009. A mars fly-by occurred in 2007. The spacecraft also conducted flybys of two asteroids, 2867 šteins and 21 Lutetia.

Rosetta observed the asteroid 2867 šteins during a flyby in 2008.

Rosetta observed the asteroid 21 Lutetia during a flyby in 2010.

Rosetta entered orbit around Churyumov-Gerasimenko in August 2014. In November, 2014, Rosetta deployed a lander, named Philae, that performed the first successful landing on a comet.

It's mission complete, the Rosetta spacecraft made a controlled impact on the comet's surface in September, 2016.

Hayabusa 2 is Japanese mission to orbit an asteroid and return samples to Earth.

The mission was launched in November, 2014, on a H-IIA rocket.

The target for the Hayabusa 2 mission is the asteroid known as 162173 Ryugu. The spacecraft is planned to arrive at the asteroid in 2018, with the samples returning to Earth in 2020. 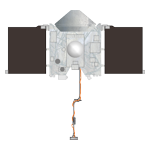 OSIRIS-REx is an American mission to orbit an asteroid, collect samples from the asteroids surface, and return the samples to Earth for study. The mission name, OSIRIS-REx, is derived from "Origins, Spectral Interpretation, Resource Identification, Security-Regolith Explorer".

The mission was launched in September, 2016, from Cape Canaveral Air Force Station, on an Atlas V-411 rocket.

The spacecraft is scheduled to arrive at Bennu in 2018. If all goes well, material samples collected from the asteroids surface will be returned to Earth in 2023.