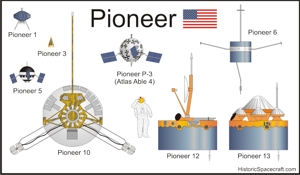 The Pioneer program was a series of exploration probes launched between 1958 and 1978. Pioneer probes conducted various missions, including some of the first lunar probes, investigations of conditions in interplanetary space, exploration of the planet Venus, as well as the first flybys of Jupiter and Saturn.

First attempts to explore space in the vicinity of the Moon. Each probe was launched on a Thor-Able rocket (right). Unfortunately, all three attempts failed to reach Lunar orbit.

Pioneer 0 was launched on August 17, 1958. A booster explosion shortly after liftoff destroyed the spacecraft.

Pioneer 1 was launched on October 11, 1958. The spacecraft failed to reach Lunar orbit due to a booster malfunction. The probe provided data on radiation and magnetic fields in near-Earth space. Pioneer 1 reentered Earth's atmosphere 43 hours after launch.

Pioneer 2 was launched on November 8, 1958. A booster malfunction prevented the spacecraft from reaching the Moon.

Replica of Pioneer 1 on display at the Udvar Hazy Center. (Photos: Richard Kruse, 2009)

The battery powered Pioneer 3 and 4 probes were equipped with geiger counters to provide radiation data from trans-lunar space. Pioneer 3 and 4 were launched on Juno 2 rockets (right).

Pioneer 3, launched on December 6, 1958, failed to achieve escape velocity due to a booster failure.

Pioneer 4, launched on March 3, 1959, was the first spacecraft to escape Earth's gravitational pull. The probe successfully flew within 60,000km of the Lunar surface.

Replica of the Pioneer 4 spacecraft on display at the National Air and Space Museum. (Photos: Richard Kruse, 2009)

A series of attempted Lunar orbiters launched on Atlas Able rockets (right). The probes carried a variety of scientific experiments, including a television camera, micrometeorite detectors, and radiation experiments.

Pioneer P-3 was launched on an Atlas-D Able rocket on November 26, 1959. A payload shroud failure shortly after launch resulted in destruction of the spacecraft.

Pioneer P-30 was launched on an Atlas-D Able rocket on September 25, 1960. A booster failure resulted in a failure to reach orbit.

Pioneer P-31 was launched on an Atlas-D Able rocket on December 15, 1960. A booster explosion shortly after launch destroyed the spacecraft.

Pioneer 5 was launched on a Thor-Able rocket on March 11, 1960. Pioneer 5 successfully studied interplanetary space between the orbits of Earth and Venus.

Replica of Pioneer 5 on display at the Udvar Hazy Center. (Photos: Richard Kruse, 2009)

A series of spin stabilized spacecraft designed to study the solar wind and interplanetary environment from several widely separated points. Pioneer 6 operated for over 30 years. Pioneer 6,7,8, and 9, were launched on Delta-E rockets (right). Pioneer E, launched on a Delta-L rocket, failed to reach orbit.

Launch attempted on August 27, 1969. A problem with the Delta-E rocket resulted in the destruction of the space probe..

The spacecraft were spin-stabilized at 4.8 rpm. Power was provided by a pair of Radioisotope Thermal Generators.

On December 3, 1973, Pioneer 10 encountered the planet Jupiter. Closest approach was around 200,000 km from the planet. This was the first spacecraft to investigate the largest planet in the solar system.

Pioneer 10 is currently on an interstellar trajectory and is traveling at 2.6 AU/year. The last communications with the spacecraft were made in 2003. More recent attempts at communication have failed. It is believed that the spacecraft no longer has sufficient power to operate the transmitter.

On September 1, 1979, Pioneer 11 became the first spacecraft to visit Saturn. The spacecraft passed within 21,000 km of the planets atmosphere

Pioneer 11 is currently on an interstellar trajectory and is traveling at 2.5 AU/year. The last communication with Pioneer 11 was made in 1995.

Pioneer H, identical to Pioneer F and G (10 and 11), served as a backup spacecraft. The mission was unflown. Pioneer H is currently on display at the National Air and Space Museum in Washington DC.


Pioneer H on display at the National Air and Space Museum

Pioneer Venus Orbiter was launched on an Atlas-Centaur rocket on May 20, 1978. The solar powered, spin stabilized spacecraft measured 2.5 m in diameter and was 1.2 m tall. The spacecraft contained a large number of scientific experiments. Among the 17 experiments was a surface radar mapper, a photopolarimeter, and several spectrometers.

The spacecraft entered orbit on December 4, 1978.

On October 8, 1992, after many years of operation and low on fuel, the spacecraft entered and burnt up in the atmosphere of Venus.

The Pioneer Venus Multi-Probe was launched on an Atlas-Centaur rocket (right) on August 8, 1978. The spacecraft consisted of a bus, a large atmospheric probe, and three smaller atmospheric probes. Approaching Venus in November, 1978, the atmospheric probes were released from the bus. The probes returned data about the composition and environmental conditions in the atmosphere of Venus. Although the probes were not designed to survive landing, one of the smaller probes continued to transmit data for over an hour after reaching the surface.

The Bus component of the Pioneer Venus Multi-probe mission carried the four atmospheric entry probes on the journey to Venus. The bus was a flat cylinder measuring 2.5 m in diameter and, by itself, weighed 290 kg. After releasing the atmospheric probes, the bus itself plunged into the atmosphere of Venus. Equipped with an ion mass spectrometer and a neutral mass spectrometer, the bus was able to return some data about the upper atmospheric layers before it was destroyed. Not equipped with a heat shield or parachute, contact was lost with the bus around 110 km altitude.

The large atmospheric entry probe measured 1.5 m in diameter. The probe deployed a parachute to slow its descent through the atmosphere. Experiments included a neutral mass spectrometer, a gas chromatograph, a solar flux radiometer, an infrared radiometer, a cloud particle size spectrometer, a nephelometer, and a variety of sensors to record pressure, temperature, and acceleration forces. The large probe was targeted to an area near the equator on the night side of the planet. Analysis of radio transmissions during the descent provided additional information about winds and atmospheric conditions.

Each of the three small atmospheric entry probes measured .8 m in diameter. The probes consisted of an aeroshell surrounding a spherical pressure vessel. The small probes contained several scientific experiments, including a net flux radiometer experiment, a nephelometer, and sensors to record pressure, temperature, and acceleration forces. Each small probe was targeted toward a different part of the planet. The 'North probe' entered on the daylight side at 60 degrees north latitude. The 'night probe' landed on the night side around 29 degrees south latitude. The 'day probe' landed on the daylight side near 31 degrees south latitude. Although not equipped with parachutes, nor designed to land, the day probe survived landing and transmitted data from the surface for over an hour. As with the large probe, transmissions from each small probe were analyzed to help characterize atmospheric conditions encountered during descent.