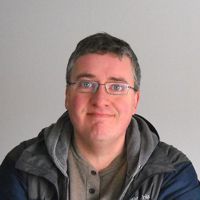 I was a volunteer at the Michigan Space and Science Center from 1996 until the museum closed in 2003. The museum was then home to the Apollo 9 spacecraft, a Gemini spacecraft trainer, and a collection of spacesuits among other things.

For its size, the museum included an impressive collection of rocket engines, including an F-1, J-2, Redstone, Atlas sustainer, Lunar Module Ascent Engine, and even parts of a NERVA nuclear thermal engine.

My first major volunteer project involved creating a 3-D virtual model of the museum. The model was created using a program called Turbo-Cad and represented one of my first attempts at modeling something this complex. The museum staff used the digital model for facilities use planning and for planning new exhibits.

My responsibilities grew to include several information technology tasks, including designing and implementing a membership database and an artifact database. I also cataloged the centers extensive film, video tape, and publication archives.

As a volunteer, I assisted in the creation of several hands-on science demonstration kits. Developed in a partnership between the museum and the local school district, the kits were designed to assist elementary school educators in teaching concepts of magnetism and electricity. My role was creating illustrations showing each step of the experiments.

When the museum closed in 2003, many of the artifacts were moved to the newly created Michigan Space Science Museum at the Kalamazoo aviation history museum. The Apollo 9 capsule would become part of the collection at the San Diego Air and Space Museum. 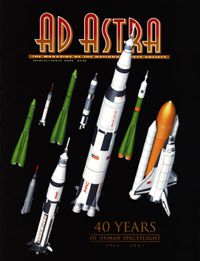 Starting in late 1990's, I was occasionally commissioned to create illustrations for magazines. My artwork appeared on the pages of Aviation History, Ad Astra, Final Frontier, and Military Technical Journal.

In 2001, I was asked to provide cover art for an upcoming issue of Ad Astra magazine. The artwork depicted all rockets that had launched humans into space. I still have a framed copy of that cover hanging near my desk.

Over the last few years, as Historic Spacecraft has grown, I have supplied artwork for a large number of museums, print publications, and websites.

Future updates to Historic Spacecraft will include more detailed artwork and cut-a-way views. I've also started developing interactive graphics for some of the spacecraft and rockets.

Send the contribution to my email address - richard@richardkruse.com

(The name of my company, Specialty Graphics, may appear on your bill.)

NOTE: To conserve bandwidth, I down-sample almost all images uploaded to Historic Spacecraft. Higher resolution images will be available for publication purposes.