Atlas was the name given to Americas first operational ICBM. Although its career as a nuclear armed missile was short-lived, the Atlas has evolved into one of the worlds premier satellite launchers. Over the last 50 years, more than 600 Atlas rockets have flown.

Stage and a Half Propulsion System

One unusual feature of the Atlas rocket is its unique staging system. In the 1950's, rocket designers faced a number of serious challenges. Clearly, there were significant benefits to the concept of 'staging', or the dropping of used engines and fuel tanks to lighten a rocket as it heads toward orbit. However, chemical rockets of this era could not be reliably started. The only way to ensure that a rocket started correctly was to start the engines while the rocket was still on the ground. Using conventional staging, with second stage engines starting in flight, would simply be too unreliable given 1950's technology.

The radical solution developed was two fold. First of all, of the three main rocket engines on the Atlas, only one remained with the Atlas all the way to orbit. The inner engine, sometimes referred to as the sustainer engine, remained permanently attached to the rocket, while the two outer engines, known as booster engines, were used only during the first few minutes of flight.

Another design feature of the Atlas was the use of an extremely lightweight structure. The structure, known as a 'balloon' structure, was so lightweight that the fuel tanks needed to be continuously pressurized to avoid collapsing under their own weight! (Atlas rockets on display at museums use an air compressor to keep the tanks pressurized. If the air compressor fails for any reason, the rocket is at risk of collapsing. Some displays have had an internal structure built within the tanks to provide support.)

The lightweight balloon structure, along with the ability to drop the booster engines in flight, allowed the Atlas to approach conventionally staged rockets in performance while still retaining the ability to start and test all main engines while still safely on the ground.

Perhaps the most famous payload launched on the shoulders of Atlas was the Friendship 7 spacecraft in 1962. It was aboard Friendship 7 that John Glenn became the third man to orbit the Earth. Atlas ultimately launched four manned Mercury missions.

Fifty years after its first orbital flight, Atlas continues to launch American military, commercial, and scientific spacecraft. Continually evolved and improved over the decades, the current version, Atlas V, bears little resemblance to versions first flown in the middle of the last century. With a heritage that spans six decades, Atlas rockets will continue to see service for many years to come.

Atlas-A rockets flew sub-orbital test flights. The missions did not fly with a sustainer engine. Only the two booster engines were included.

The Atlas-B missile was the first version to include both the jettison-able booster engines, and the sustainer engine.

At launch, all three engines would ignite. Later in the ascent, the two booster engines would shut down and drop away. The sustainer engine would continue firing.

Not an operational missile, the Atlas-B was used to further test components of the Atlas missile.

Ten Atlas-B missiles were launched during 1958 and 1959. Three launches were failures. One missile went into orbit with the SCORE payload (below).

Atlas-B Score was an orbital mission consisting of a modified Atlas-B rocket and a communication experiment known as SCORE (Satellite Communications by Orbiting Relay Equipment). The mission was launched on 18 December 1958. Once in orbit, communication experiments were carried out, including the broadcasting of a Christmas message recorded by President Eisenhower. Additional messages were sent to the spacecraft, recorded, and retransmitted to ground stations.

Planning for the mission was done in secrete. The first public acknowledgment of the mission occurred only after the spacecraft was in orbit.

Atlas-D was the first operational version of the Atlas missile. The Atlas-D was later used to launch Mercury capsules into Earth orbit.

The Agena, used first as an upper stage on Thor-Agena rockets was adapted for use on Atlas rockets.

Several Agena models were used as the program progressed, including the Agena-A, Agena-B, and Agena-D stages.

Many space probes were launched on Atlas-Agena rockets. Including all nine Ranger lunar probes, the Mariner 2 and 5 Venus flyby spacecraft, the Mariner 3 and 4 Mars probes, and all five Lunar Orbiter missions.

A large number of military spacecraft were launched , including reconnaissance and early warning satellites.

During Project Gemini, Agena upper stages were modified to use as docking targets for Gemini spacecraft.

Atlas-F was an operational ICBM that first flew on 8 August 1961.

Photos of an Atlas F (10F) on Transporter

Atlas rocket on transporter at the US Space and Rocket Center in Huntsville, Alabama. (Photos: Richard Kruse, 2007)

Atlas-H was first flown in 1983. A total of five Atlas-H launches took place.

Hydrogen fuel can offer a significant performance increase over other fuels, especially in upper stages.

Atlas-LV3C was the first Atlas rocket to use the Centaur upper stage (right). The first launch attempt, conducted on 8 May 1962, failed. The second test flight, launched on 27 November 1963, succeeded.

The Solar and Heliospheric Observatory (SOHO) was launched on an Atlas IIAS on 2 December 1995.

The Atlas III, first flown on 24 May 2000, replaced the 'stage and a half' three chambered rocket system with a two chambered RD-180 engine.

The Russian designed RD-180 engine is fueled with kerosene and liquid oxygen. The new engine represented a significant improvement in both efficiency and reliability over the previous Atlas engines. The switch to the RD-180 engine allowed Atlas to remain viable in the increasingly competitive commercial launch market.

The Atlas V 400, like earlier Atlas variants, features a four meter payload fairing. The fairing is available in a variety of lengths to meet payload requirements.

Performance can be increased by adding up to three solid rocket boosters.

Notable payloads include the Lunar Reconnaissance Orbiter (LRO), and the Lunar Crater Observation and Sensing Satellite (LCROSS), both launched on 18 June 2009. The booster was a 401 model.

The Solar Dynamics Observatory was launched on an Atlas V-401 on 11 February 2010.

Among the payloads launched on the Atlas V 411, was the OSIRIS-REx asteroid mission in 2016. 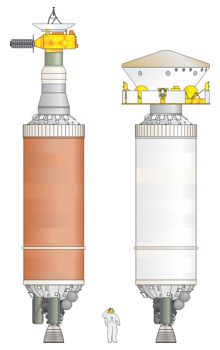 Atlas V Interplanetary Payloads
Illustration showing Centaur stages with the New Horizons Pluto probe and the Mars Science Lander spacecraft. Both missions were launched on Atlas V Rockets. (An astronaut is included as a scale reference.)

Atlas V 500 performance can be adjusted by adding up to five solid rocket boosters. The large 5 m payload fairing is available in several lengths.

An Atlas V, 551 model, was used to launch the New Horizons mission to Pluto. The New Horizons launch, on 19 January 2006, imparted a velocity of 16.26 kilometers per seconds to the probe. This is the fastest speed of any space probe so far. New Horizons is on a solar-escape trajectory and will make a close fly-by of Pluto in July of 2015.

An Atlas V, 541 model, launched the Mars Science Laboratory in November of 2011.