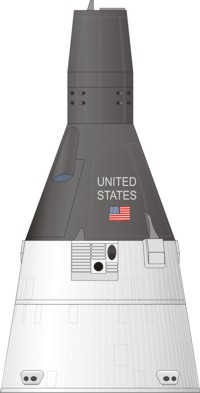 America's Gemini program consisted of two unmanned and ten manned missions flown during 1965 and 1966. The highly successful Gemini program helped bridge the gap between the Mercury and Apollo programs.

The astronauts sat side by side in the capsule. The commander, known as the command pilot, sat in the left seat, while the pilot sat in the right seat. The crew sat in ejection seats. Lacking an escape tower similar to Mercury or the later Apollo spacecraft, the ejection seats provided a way for the astronauts to escape from the vehicle, at least at low altitudes.

Gemini spacecraft were investigated for use by the United States Air Force. Sometimes referred to as Gemini-B or Blue Gemini, these proposed missions would conduct military operations as part of the Manned Orbiting Laboratory (MOL) project. The Gemini 2 spacecraft was re-flown on an Air Force Titan-IIIC in 1966.

Land recovery, using landing skids and an inflatable wing, were investigated early in the program. However, time constraints required switching to a more traditional parachute and ocean landing. Several developmental spacecraft, including Gemini TTV-1, TTV-2, and El Kabong, were constructed to test techniques for landing spacecraft on existing runways.

Experience gained during project Gemini proved critical to the success of the Apollo lunar missions later in the decade.

Position mouse pointer over the part names to see their location. Click links for more information.

The rendezvous and recovery section contained a rendezvous radar, a drogue parachute, and a main parachute.

A protective cover, made of fiberglass reinforced plastic laminate, protects the nose of the spacecraft at liftoff. The cover is ejected later in the flight. The rest of the section is covered with beryllium shingles.

During re-entry, the rendezvous and recovery section is pyrotechnically separated from the spacecraft. A small pilot parachute pulls the section away, while also deploying the main parachute.

The RCS section contains fuel and oxidizer tanks, along with 16 attitude control thrusters.

The RCS section has an internal titanium frame, with eight beryllium panels forming its outer skin. The forward end of the RCS section contains attachment points for the main parachute.

Photos of the Gemini 8 Capsule on display at the Neil Armstrong Air and Space Museum. (Photos: Richard Kruse, 2008)

The cabin section outer shell is shaped like a truncated cone. A smaller, irregular shaped, pressure vessel is located within the outer shell. The space between the pressure shell and the outer shell is divided into several unpressurized equipment bays, housing various electronic and environmental control system components.

Each crewmember sits beneath a large, rectangular, hatch. Both hatches are hinged on the outboard side and contains a small viewing window.

Images: Hatch details of the Gemini 8 Capsule on display at the Neil Armstrong Air and Space Museum. (Photos: Richard Kruse, 2008)

A large ablative heat shield, at the base of capsule, protected the crew from re-entry heating. Heat resistant shingles, composed of Rene' 41, protected the sides of the capsule.

The adapter section includes the retrograde section and the equipment section.

Six maneuvering thrusters are located around the perimeter of this section. Four of these thrusters, located 90 degrees apart from one and other and firing perpendicular to the spacecrafts long axis, provided translation control in two axis. Two additional thrusters, firing forward, provided braking thrust.

Environmental control system components, oxygen tanks, fuel cells, battery containers, fuel tanks for the orbital maneuvering system, and other electrical equipment, were housed in this section. Equipment varied according to each missions objectives. For instance, the longer duration missions carried fuel cells, while the shorter missions relied on batteries for electrical power.

Photos of a Gemini fuel cell on display at the U.S. Space and Rocket Center. (Photos: Richard Kruse, 2007)

Developing techniques for orbital rendezvous and docking were among the goals for project Gemini. Two spacecraft were developed to provide docking targets for Gemini missions.

The Gemini Agena Target Vehicle (GATV), based on a highly modified Agena upper stage, was developed as the primary docking target for Gemini spacecraft. Additions to the standard Agena included extra communications equipment, a radar transponder, acquisition lights, and a docking cone.

The docking cone was designed to receive the nose of a Gemini capsule. An indexing bar, protruding from the side of the Gemini spacecrafts nose, slid into a matching v-notch on the docking cone, assuring proper radial alignment between the docked spacecraft. Equipment within the docking cone allowed the spacecraft to be securely attached.

While docked, equipment in the Gemini capsule allowed astronauts to control the Agena spacecraft. The Gemini-Agena combination could use the Agena engine to make significant orbital maneuvers.

GATV-8 (GATV-5003) was launched on 16 March 1966. Gemini 8, launched shortly after, was able to rendezvous with and perform the first ever docking between two orbiting spacecraft. GATV-8 was later used as a passive rendezvous target for Gemini 10.

GATV-10 (GATV-5005) was launched on 18 July 1966. Gemini 10, launched shortly after, was able to rendezvous with and dock with the Agena. While docked, the Gemini 10 crew were able to command firings of the Agena main engine, raising the spacecrafts orbit from 300 km to 764 km.

GATV-11 (GATV-5006) was launched on 12 September 1966. Gemini 11, launched shortly after, was able to rendezvous with and dock with the Agena. While docked, the Agena engine was used to raise the spacecrafts orbit to a record apogee of 1374 km.

GATV-12 (GATV-5001) was launched on 11 November 1966. Gemini 12, launched shortly after, was able to rendezvous with and dock with the Agena. A problem with the Agena engine prevented planned orbit changes.

The Augmented Target Docking Adapter (ATDA) was developed as an alternate docking target for Gemini spacecraft. The ATDA could accomplish many of the objectives of the larger GATV. However, without the Agena main engine, the ATDA could not perform translational orbital maneuvers. Stabilization and attitude control were accomplished with a series of 16 thrusters.

A number of running lights, along with white and black stripes painted on the hull, aided visual acquisition of the docking target.

Only one ATDA was flown. Launched on 1 June 1966, the ATDA was placed into orbit by an Atlas rocket. Unfortunately, the payload shroud failed to separate completely. Although the crew of Gemini 9 was able to rendezvous with the ATDA, a docking was impossible.

The Titan II GLV (Gemini Launch Vehicle), was developed to launch Gemini spacecraft. The rocket was derived from the Titan II ICBM.

The Agena, used first as an upper stage on Thor-Agena rockets was adapted for use on Atlas rockets. Atlas-Agenas, using Agena upper stages modified as docking targets, were used to support Gemini missions.

The ATDA, developed as a backup to the GATV (Gemini Agena Target Vehicle), was launched on an Atlas rocket.

Gemini 2 flew on a successful suborbital test flight on 19 January 1965. The capsule was refurbished and flew a second time in 1966, becoming the first American spacecraft to fly twice in space. The second mission, a test flight for the Air Force Manned Orbiting Program (MOL), was launched on a Titan IIIC rocket.

Gemini 2 is on display at the Air Force Space and Missile Museum. (Photos: Richard Kruse, 2009)

Gemini III was launched on 23 March 1965. The mission was flown by Virgil Grissom and John Young. The mission performed three orbits and lasted 4 hours, 52 minutes.

Gemini VII is on display at the National Air and Space Museum. (Photos: Richard Kruse, 2008)

Gemini VII is on display at the Udvar-Hazy Center. (Photos: Richard Kruse, 2008)

Gemini VI was launched on 15 December 1965. The mission was flown by Walter Schirra, Jr. and Thomas Stafford. The mission rendezvoused with the already orbiting Gemini VII spacecraft.

Gemini VIII was launched on 16 March 1966. Neil Armstrong and David Scott performed the first orbital docking with an Agena docking target. The mission was cut short due to a stuck thruster. The crew safely performed an emergency de-orbit and landing.

Photos of the Gemini 8 Capsule on display at the Neil Armstrong Air and Space Museum. (Photos: Richard Kruse, 2008)

The mission was planned to rendezvous and dock with an Agena docking target. However, the original docking target failed to reach orbit. The Gemini IX mission was delayed while an alternate docking target, known as an augmented target docking adapter (ATDA), could be prepared and launched. Unfortunately, the payload shroud on the ATDA failed to separate completely.

Gemini IX was able to rendezvous with the ATDA, but the stuck payload shroud prevented docking.

Eugene Cernan conducted an EVA during the mission.

Gemini X was launched on 18 July 1966. The mission was flown by John W. Young and Michael Collins. The mission rendezvoused and docked with an Agena docking target. The Agena engine was used to raise the orbit of the docked spacecraft.

Gemini XI was launched on 12 September 1966. The mission was flown by Charles Conrad, Jr. and Richard Gordon, Jr.. The mission rendezvoused and docked with an Agena docking target.

Gemini XI is on display at the California Science Center. (Photo: Andrew Masterman)

Edwin Aldrin conducted several EVA's, including a record five and half hour spacewalk, during the mission.

Gemini 12 is on display at Adler Planetarium in Chicago. (Photos: Richard Kruse, 2008)

Photos of the Gemini Capsule on display at the National Museum of the United States Air Force. This capsule is a Gemini B configuration, intended for use as part of the Manned Orbiting Laboratory (MOL) program. Note the circular hatch between the ejection seats. (Photos: Richard Kruse, 2007)

El Kabong I was originally manufactured by the NASA Manned Spacecraft Center and has recently been restored by the Air Zoo. The artifact is on loan from the National Air and Space Museum.

This suit is on display at the Astronaut Hall of Fame. (Photos: Richard Kruse, 2009)

Launch Complex 19, located at Cape Canaveral Air Force Station, was the launch site for all ten manned Gemini missions. Additionally, 17 unmanned Titan I and Titan II missions were flown from the complex. Gemini 12, launched on November 11, 1966, was the last mission launched from complex 19.
NOTE: Since these photos were taken, the white room has been restored and moved to the Air Force Space & Missile Museum.
(These photos were taken by Richard Kruse in 1997.)

Launch Complex 19 White Room has been restored and is now on display at the Air Force Space and Missile Museum
(Photos: Richard Kruse, 2009.)