Formed in 1975, the European Space Agency (ESA), has been a dominant player in the commercial satellite launch market for several decades. The Ariane rocket family has evolved over the years to meet the demands of the market.

Diamant was a series of French satellite launchers. The program began during the early 1960's, with the first successful orbital mission in 1965. The final launch occurred in 1975.

The first Diamant A launch successfully placed the Asterix satellite into orbit on 26 November 1965. A total of four Diamant A rockets were launched. All succeeded in placing payloads into orbit. Diamant A launches took place from a site in Algeria.

First launched in 1970, the Diamant B featured enlarged first and third stages.

Of the five Diamant B rockets launched, three successfully placed payloads into orbit. All Diamant B launches occurred from Kourou in French Guiana.

Three Diamant BP4 rockets were successfully launched. All missions were launched in 1975 from Kourou, French Guiana.

Five rockets were constructed for the program. (Identified as R0, R1, R2, R3, and R4.) R0 and R1 were flown as sub-orbital test flights. The R2 mission, launched in 1970, was an attempted orbital mission. A problem with the rockets second stage prevented the payload from reaching orbit. The R3 mission, conducted in 1971, successfully placed a satellite into Earth orbit.

The fifth rocket, Black Arrow R4, was not launched and is currently on display at the Science Museum in London. (Photos: Richard and Sharron Kruse, 2009)

Blue Streak was a medium range ballistic missile developed by Britain in the 1950's. The missile used kerosene and liquid oxygen as propellents.

Intended to form part of Britain's nuclear deterrent, it was planned to base operational missiles in underground silos.

The missile program was canceled in 1960, before entering operational service. The rocket would later become the first stage of the Europa rocket.

The Europa rocket, operated by the European Launcher Development Organization (ELDO), was a joint project between several nations. The first stage was based on the British Blue Streak medium range ballistic missile. France supplied the second stage, while the third stage was built by Germany. Several other nations provided hardware and services for the program.

Eleven missions were launched between 1964 and 1971. Most of the flights were conducted from Woomera , Australia, while the last mission launched from Kourou, French Guiana.

Ariane rockets are civilian operated, expendable launch vehicles. They are launched from a spaceport in French Guiana.

For over 30 years, Ariane rockets have been the mainstay of European space launch capabilities. The reliability and versatility of Ariane rockets has allowed them to become one of the worlds premier commercial satellite launchers.

Photos of a Viking rocket engine on display at the Udvar-Hazy center. (Photos: Richard Kruse, 2008)

The Ariane 2 configuration first flew on 31 May 1986. A total of six Ariane 2 rockets were launched, with the last taking place on 2 April 1989. 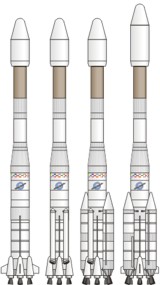 Ariane 4 represented a substantial increase in capability over the Ariane 2 and 3 versions. A large number of improvements were incorporated in the new design, including stretching the first stage propellant tanks.

The most powerful Ariane 4 configuration, with four liquid strap-on boosters, was known as an Ariane 44L.

Over 100 payloads, including a large number of communications satellites, were launched on Ariane 4 rockets. The last flight took place on 15 February 2003.

The Ariane 5 first stage uses a single Vulcain rocket engine. The Vulcain uses liquid hydrogen and liquid oxygen as propellants. The first stage is supplemented with a pair of solid rocket boosters.

The first Ariane 5 rocket was launched on 4 June 1996. The rocket suffered control problems and had to be destroyed.

Despite problems with some of the early flights, the Ariane 5 has become a reliable launcher.

One high profile payload for the Ariane 5 is the European ATV spacecraft. The ATV (Automated Transfer Vehicle) is designed to carry cargo and fuel to the International Space Station. The first ATV, known as Jules Verne, was launched on 9 March 2008. The ATV docked with the ISS in April of that year. After several months docked to the station, the ATV separated and re-entered Earths atmosphere. Additional ATVs are scheduled to resupply the space station periodically.

Several large astronomical observatories have been launched on Ariane 5. The XMM-Newton Telescope, a large x-ray observatory, was launched on 10 December 1999. The Herschel Telescope and the Planck Microwave Observatory were launched on the same rocket on 14 May 2009. The dual launch of Planck and Herschel used a longer then normal payload fairing to enclose the observatories (illustration at right).

The Vega launcher is designed to launch smaller payloads.

The European Space Agency launches Soyuz rockets, purchased from Russia, from its spaceport in French Guiana.